Charred leek and Hazelnut salad with a black mustard dressing 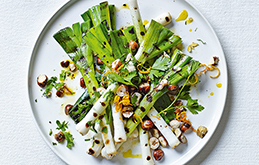 Did you know that leeks have been the National emblem of Wales since 640AD when according to legend, the Welsh defeated the invading Saxons because they had leeks attached to their hats!
The leeks prevented them from attacking each other by mistake.

Leeks belong to the onion family and look a bit like a big spring onion, with a milder onion flavour.
To prepare leeks trim the root and a little off the top of the green leaves, slicing down the centre and washing well under cold water. Leeks can be quite dirty as they are grown with earth around them to keep them white, much like white asparagus.
I love to char leeks on the BBQ, it’s add’s further flavour to them and works really well with the sweetness of the white layers

They also make for a tasty salad! This salad is great at this time of the year as the leeks are served hot so great whilst the temperatures is still low it’s a winner.

Charred leek and Hazelnut salad with a black mustard dressing

Bring a large pot of water to the boil with a tbsp of salt in it. Trim your leeks and wash, drop into the boiling water and count to 10.
Remove and plunge into iced water until cold. Dry and drizzle with oil and season.

Lay leeks onto a preheated BBQ and char for a couple minutes on each side, being careful as the leeks will colour up quickly.
Lay out onto your platter and sprinkle over goats cheese, hazelnuts and orange zest.

Drizzle over the dressing just before you serve!

Place all the ingredients into a glass jar and tighten on a lid and shake!